When a student is a shining example of The Knox Core Values of Respect, Responsibility, Integrity, Courage, Kindness and Scholarship, we love to shout it from the rooftops! Sophomore and recent Eagle Scout inductee Tommy Barry from Miller Place, New York is a strong example of a student who embodies these Core Values both on campus, and within the community.

Tommy joined The Knox School community in 2016 when he was looking for a small educational environment that could foster his academic success. Longer class periods, hands-on learning, personalized attention from caring faculty, and ample opportunities to become involved in extracurricular activities were a driving force in his decision to enroll as a student. Over the past year and a half, Tommy has become extremely committed to the Knox Crew team, rowing in doubles and fours, as well as erging during the off-season. This challenging sport keeps him active and attuned with nature.

A lover of marine biology and physical sciences, Tommy felt that learning more about STEM (science, technology, engineering, mathematics) education may spark deeper scientific interests that could develop into a potential career path, so he joined the Knox STEM club, where he is learning about engineering, robotics, architecture and more. This developing interest and his extensive commitment to his community through scouting energized the Eagle Scout project that awarded him with Boy Scouts’ highest Honor.

Tommy’s love for marine science and life on the water inspired his most recent success, a community outreach project that allowed him to earn his rightful place as an Eagle Scout. Working in collaboration with the Mount Sinai Nature center at Cedar Beach, Tommy carefully planned, raised funds, collaborated with town officials, and executed a project that will allow the Center’s touch-tanks to be utilized during this hot, bright summer season. The project consisted of erecting a large wooden sunscreen structure over the facilities underutilized touch-tanks. This structure was designed to offer cooling shade for the animals to would be blinded by the sun, and become sick by the bacterial growth that develops when too much sun and heat are exposed to the tanks. This summer will be the first where the tanks will be filled and open to the public, which will be an exciting and educational benefit to the community.

Although Tommy has ample time to figure out what he wants to “be” when he grows up, he hopes to pursue a profession that benefits the community. As the son of a police officer, he is considering following in his father’s footsteps; however, his love of biology and marine science draws him towards considering a profession in which he can study the sea. Regardless of the path that he chooses, we are confident that he will be extremely successful in his future endeavors! 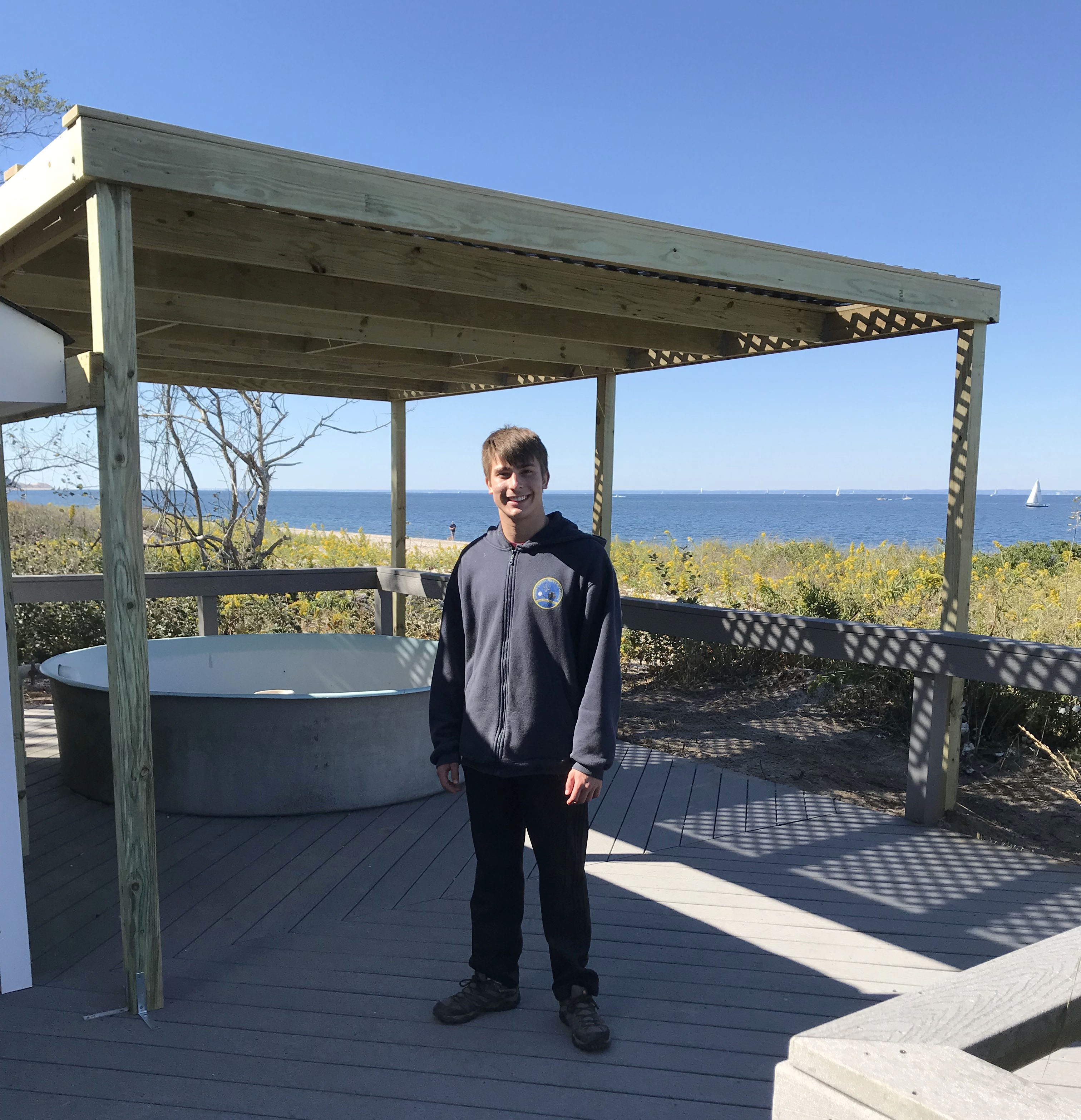 Tommy Barry ’20 standing in front of his Eagle Project at the Mount Sinai Nature center at Cedar Beach.