Congratulations to our Awards Recipients! 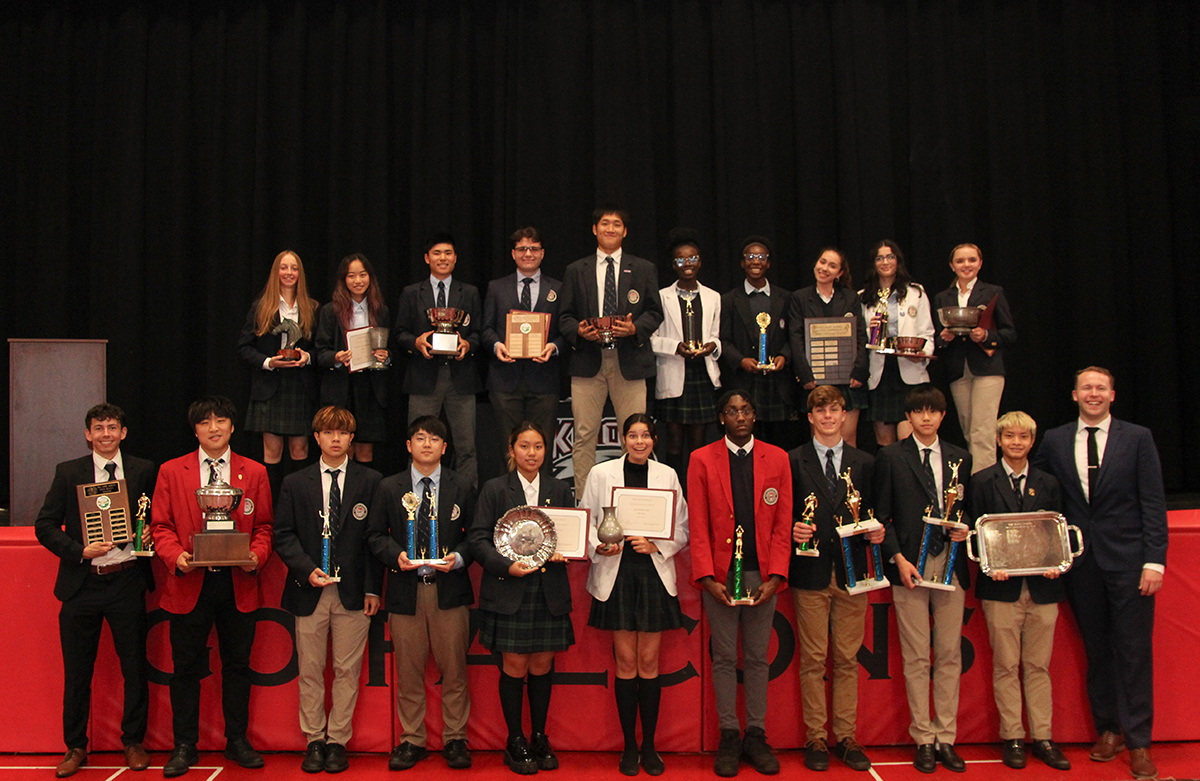 The Knox Athletics Association (KAA) hosted its annual awards reception on Thursday, June 2, 2022, in Bancroft-Phinney Hall on the campus of The Knox School.

Here is a complete list of all awards reciptients:

Middle School Riding Improvement Overall – Awarded to the rider who has shown the most improvement overall. – Maggie Lawrence

Upper School Jumping – A perpetual trophy, this bowl was presented by Colonel Simon Acoutin a formal faculty member, and is awarded for improvement over fences. – Kei Katoh

The Kyrie McAdam Novice Horsemanship Cup – Awarded to the rider who has shown the most improvement overall. – Lily Wang

The Snowman Award – Presented to Knox by a former riding master, Harry DeLeyer, is awarded annually to the student who has done the most for the Riding Club, whose academic work is good, and who is a good rider.  In short, an all-around student. – Yvonne Xie

Sportsmanship Trophy – Presented by Smoke Run Farm and is given yearly to the rider who is not necessarily the most outstanding rider but is wholeheartedly involved in all aspects of the sport. – Chloe Bain

Equestrian Versatility – Presented by Mrs. Joan Johnson and Ms. Phebe Phillips ‘68 to recognize versatility in equestrian skills-someone who is adept at riding any horse and obtaining good performance from it. – Katrina Pugni

Boys Soccer:
The High Scorer in Soccer Award – Established in 1981 to recognize whoever has scored the highest number of goals this season – Adam You

The MVP Award – This award recognizes sportsmanship, cooperation, good attitude, and competitiveness during the fall season – Adam You

Best Cooperation in the Gym – This goes to a student who is most helpful and dependable, who knows what has to be done and does so without having to be told, who is willing to give up free time, and who is not necessarily an athlete but who is interested in sports, and who wants to contribute to a competitive team. – Tommy Nguyen

High Point Winner – This award is presented by Mrs. Walter Whittaker, whose daughter Bette won it in 1963. It is given to the athlete of the year, not necessarily the best athlete, who is a team player, who exhibits good sportsmanship, a good attitude, and who presents a good performance. – Vasia Tassiopoulos

Allen Manfuso Athlete of the Year Award – Established in 2010, athletes are nominated by head coaches based on their ability to lead, sportsmanship, exceptional athletic abilities, and integrity. This year I am proud to give this award to a young man who has gone above and beyond in all aspects but especially in athletics. – Alex You